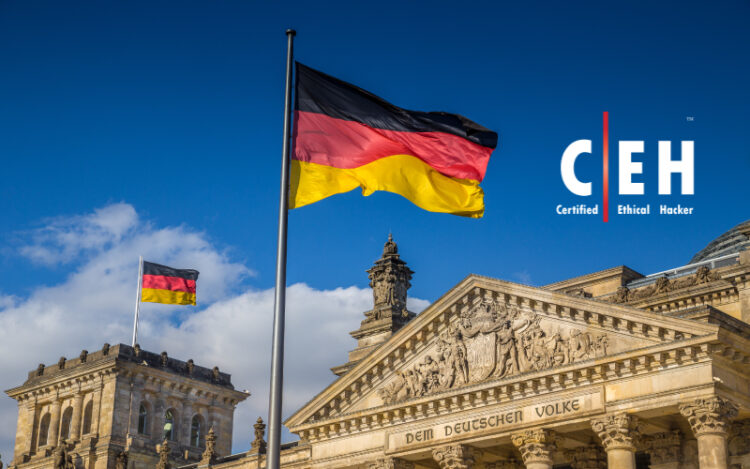 Over 220,000 cybersecurity professionals have been trained in EC-Council programs since we embarked on our mission to help improve the global levels of cybersecurity talent. Starting this month, thousands more will get trained in the newly launched German version of the globally recognized Certified Ethical Hacker (C|EH) Exam.

“Ethical hacking is a fundamental requirement of every organization or government entity. With the exam now in German, residents of German-speaking nations will have the opportunity to prove to employers around the world that they have what it takes to become a Certified Ethical Hacker” – Philip Blake, European Director of EC-Council.

Germany, one of the world’s strongest economies and leading member of the European Union, has been badly hit in recent years by cyber attacks. It is estimated that cybercrimes have cost German manufacturers some €43 billion. SME’s, which are the backbone of Germany’s economy, are the most vulnerable to threats as reported by German IT industry body Bitcom. In response to cybercrime, the German government has started ramping up its offensive capabilities in cybersecurity to thwart such attacks. Entities such as the Federal Office of Information Technology Security (BSI), The National Center for Cyber Defense, Federal Office of Civil Protection and Disaster Assistance have been formed to strengthen and raise the cybersecurity standards of the nation.

Getting through EC-Council’s C|EH program means that candidates would have mastered skills in an accredited ethical hacking methodology that is widely used by industry professionals in most demanding penetration testing or ethical hacking scenarios.

This new German version joins EC-Council’s other released Japanese version that was an instant hit in Japan. The firm plans to roll out more language versions of its portfolio programs shortly to embrace an even wider community. Jens Gilges, one of EC-Council’s German CEI’s, endorsed this new exam ‘I had the chance to test the German version of the Certified Ethical Hacker exam. Being around IT Certification tests for now almost 20 years, I was always afraid to take the exam in languages other than English because of bad translation. The German CEH exam was very well translated and very nice to read. The questions were very straight and clear. I would recommend this test to anybody who wants to take a German exam and enhance their IT Security career.’

EC-Council has been the world’s leading information security certification body since the launch of its flagship program, Certified Ethical Hacker (C|EH), which created the ethical hacking industry in 2002. Since the launch of C|EH, EC-Council has added industry-leading programs to their portfolio to cover all aspects of information security including EC-Council Certified Security Analyst (ECSA), Computer Hacking Forensics Investigator (C|HFI), Certified Chief Information Security Officer (C|CISO), among others.

EC-Council Foundation, the non-profit branch of EC-Council, created Global CyberLympics, the world’s first global hacking competition. EC-Council Foundation also hosts a suite of conferences across the US and around the world, including Hacker Halted, Global CISO Forum, TakeDownCon, and CISO Summit.

Ensuring that you get the best experience is our only purpose for using cookies. If you wish to continue, please accept. You are welcome to provide a controlled consent by visiting the cookie settings. For any further queries or information, please see our privacy policy.
Do not sell my personal information.
Cookie SettingsAcceptReject
Manage consent

This website uses cookies to improve your experience while you navigate through the website. Out of these, the cookies that are categorized as necessary are stored on your browser as they are essential for the working of basic functionalities of the website. We also use third-party cookies that help us analyze and understand how you use this website. These cookies will be stored in your browser only with your consent. You also have the option to opt-out of these cookies. But opting out of some of these cookies may affect your browsing experience.
Necessary Always Enabled
Necessary cookies are absolutely essential for the website to function properly. These cookies ensure basic functionalities and security features of the website, anonymously.
Functional
Functional cookies help to perform certain functionalities like sharing the content of the website on social media platforms, collect feedbacks, and other third-party features.
Performance
Performance cookies are used to understand and analyze the key performance indexes of the website which helps in delivering a better user experience for the visitors.
Analytics
Analytical cookies are used to understand how visitors interact with the website. These cookies help provide information on metrics the number of visitors, bounce rate, traffic source, etc.
Advertisement
Advertisement cookies are used to provide visitors with relevant ads and marketing campaigns. These cookies track visitors across websites and collect information to provide customized ads.
Others
Other uncategorized cookies are those that are being analyzed and have not been classified into a category as yet.
SAVE & ACCEPT